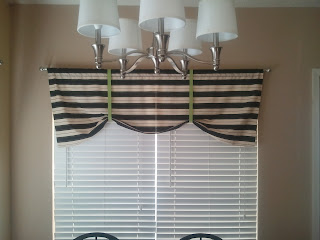 We've been making some changes in our kitchen lately and a while back I added these new valances. I wanted something a little brighter and fresher in there. I was soooo tired of my striped burgundy,yellow,blah,blah,blah ones . Just too dark.
I pinned a tutorial for these from Pinterest (where else) and got to work. Well, first, I enlisted the help of my husband. He gives me motivation for projects like this. He's very handy, too, and knows how to sew and make things. He doesn't get scared by fabric and sewing machines like I do!
The tutorial was for "no sew" valances but I.....ahemm, my husband, sewed the top of these so we could use a rod for them. For the rest of the hems, we just used "Stitch Witchery" and and iron. It's great, you just put in a piece of the stitch witchery fold the fabric over it and iron. Easy. Even for me. I'm happy with the way they turned out and love that my kitchen looks a little brighter. You can find the link for the tutorial here.http://cherrystreetcottage.blogspot.com/2010/06/super-easy-no-sew-curtainsvalance.html﻿ 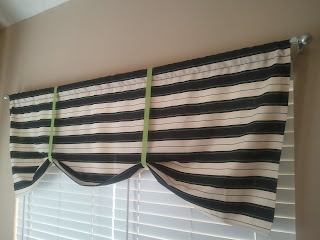 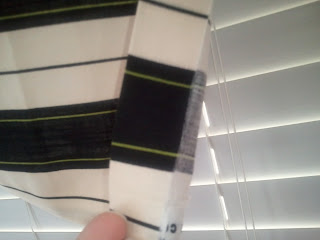 I Must-ache you a question. Do you like our 'staches? 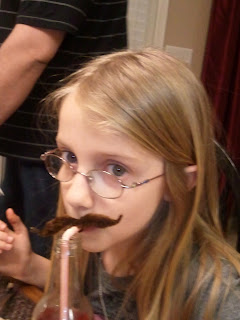 So, do you like our mustaches? I think they are rockin' the 'staches, if I do say so! We had these fun mustache sippers to go with our Valentine's dinner a while back. I had cherry Crush(Crush/Valentine's Day. I thought it was fitting)for everyone to drink and I thought this would be a fun addition. I saw the idea on Pinterest and loved it! All you need are pipe cleaners(brown fuzzy ones) and straws. Just cut the pipe cleaner in the middle, wrap it around the straw and curl up the ends. You have a 'Stache Sipper. They would be great for parties. My kids loved them! Check out the original post here.﻿ 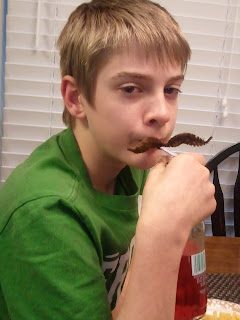 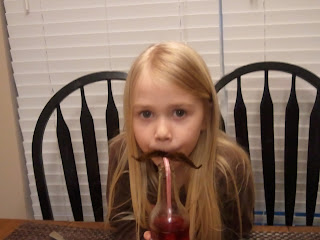 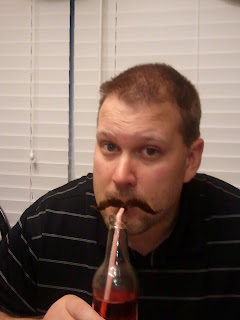 Well, it's been a while since my last blog so I thought I would get back to it. Hopefully I can get some things on here to share with you. The first being my son's first wrestling season. The season started Nov. 1 and went to the end of January. Trent absolutely LOVED wrestling and was sad to see the season end!
Wrestling involves hard practices, conditioning, diet and discipline. Trent hung in there and he did work hard and learned a lot this season. He had some wins and some losses, but most importantly he improved and learned. It was hard sometimes to see him being twisted all around, but we loved watching him do his thing. He can't wait for summer to join the wrestling club here and learn even more. Great season Trent!
I thought I'd share this poem which I received at the wrestling banquet this year. It pretty much sums up our experience with wrestling:
The Wrestling Parent
Parents in wrestling are courageous--it's true;
They feel all the pain that their boy must go through.
At home, when he diets, they wish it could stop,
Yet know he must do it to stay on top.
Excuses for losing they will never endure,
Don't blame the ref, son, because of the score.
The coach, he will show you the best way to move,
Keep working in practice if you want to improve.
At dual meets you'll see them whispering a prayer,
As their boy must compete with no one else there.
Whatever the outcome-Mom cheers with deep pride,
While Dad- you will notice-stands right by his side.
They'll drive to tournament; many miles away,
To witness a son who's prepared for this day.
Their boy, he has trained, with all of his might,
Having hopes of becoming a champion tonight.
But should he fall short, at his corner you'll find,
A Mother and a Father- supportive and kind.
They teach that through wrestling he'll learn about life,
Yes, living is filled with both triumph and strife.
Now if you are searching for people who care,
Just look by a mat, they'll always be there.
Such love for the sport is truly inherent,
That's why we salute, The Wrestling Parent! 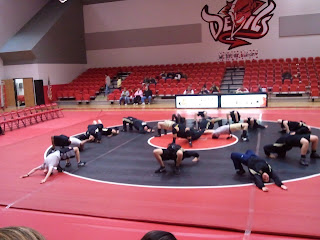 Stretching for their matches! 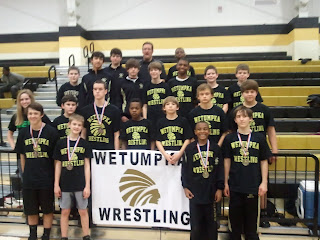 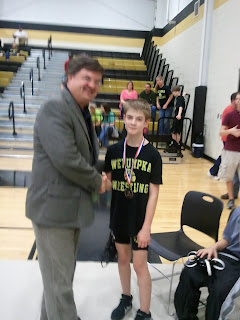 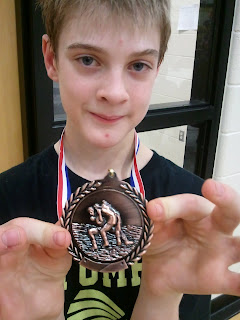 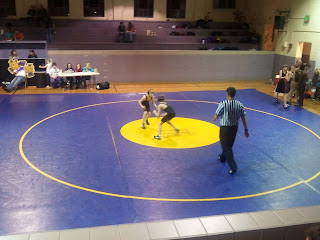 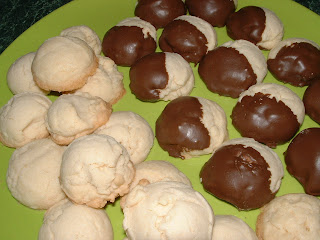 Can you believe it?! I'm actually posting a blog! I have just been busy with this and that and haven't really been feeling "the blog" lately. However, I thought I would share this yummy little cookie recipe. It would go great on a Christmas cookie plate. These Shortbread Meltaways are light and melt in your mouth delicious. I dipped some in chocolate and left some plain. Very good either way! 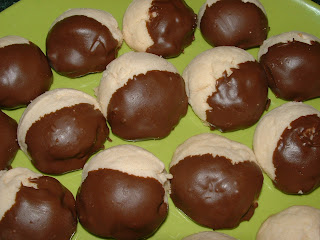 In a mixing bowl, cream butter and confectioner's sugar. Beat in vanilla. Combine the flour and cornstarch; gradually add to creamed mixture. Drop by teaspoonfuls onto ungreased baking sheets. Bake at 350 for 11-13 minutes or until bottoms are lightly browned. Cool for 5 minutes before removing from pans to wire racks. Meanwhile, melt about 1/2 package of almond bark according to package directions. Dip half of cookie in chocolate. Let cool.
**I think this recipe makes about 3 dozen cookies. The amount is not on my original recipe and I forgot to count them. 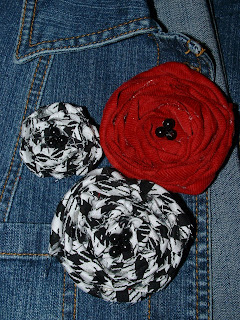 I finally made rosette pins! I've been seeing rosettes for a long time now all over the place and after seeing a sweet tutorial on Pinterest, I thought I'd give them a try. I made hounds tooth and crimson rosettes so I could wear them to an Alabama football game, but the possibilities are really endless with them. Use any color, pattern or fabric you want. I'm kind of bummed I didn't take step by step pics to show. Sorry. Once you get going, they are pretty easy. Mine are no where near perfect. You can see hot glue on the crimson one, but that's okay. Hopefully I'll get better the more I make. I will try to explain how to do it, but there are lots of tutorials out there. I am looking forward to making more of them!!

1. Cut a piece of fabric. Just depends on the size you want the rosette to be. For the larger ones, I did about a 5 inch long by 2 inch wide strip. For smaller ones, use less length.
2. Fold the fabric in half horizontally. You can iron it at this point so it stays down better.* Have your glue gun all fired up.
3. Start to roll your strip of fabric to make a center for the rosette.
4. Once you have a center, turn or twist the fabric as you go around the center and hot glue every so often so your fabric will stay together.
5. Once at the end of your fabric, just tuck it in the back of the rosette and hot glue.
6. Cut a small circle out of felt and hot glue to the back of the rosette.
7. Hot glue the pin or alligator clip to the felt. Let dry.
8. You can use beads, rhinestones, etc. for the center. Just hot glue to center of your rosette.
Not a great step by step, but hope it helps. 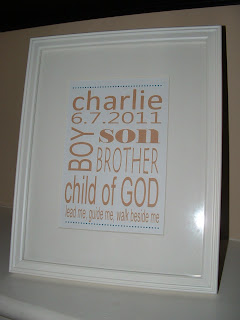 I've been having fun making different subway art recently and thought I would try something baby themed. A friend of mine had her fourth child back in the summer and I thought this might be cute and personal for the baby's room. I'm happy with the way it turned out. Hopefully it will go well in baby's room. Makes me want to try a baby girl themed one now! 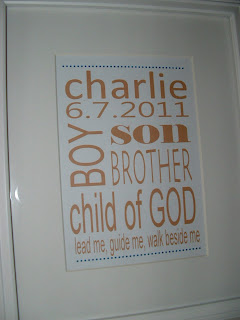 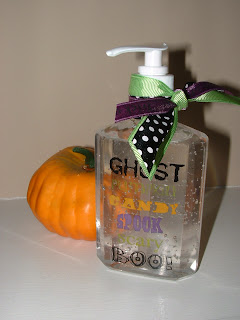 Recently I sent my daughter to school with this sanitizer all prettied up for Halloween. I thought it would be a cute and useful little gift for her teacher to use in their class. I know school kids go through a lot of this stuff!

I used a bottle of Purell hand sanitizer that I pulled the front and back labels off of. It came off clean. If it hadn't, I would have used my Goo Gone to get off all the sticky stuff so I could have a clean surface. Then I just stuck on Halloween stickers I got at Hobby Lobby(you can't see some of them well, but they say GHOST,PUMPKIN,CANDY,SPOOK,SCARY,and BOO) and tied some coordinating ribbon. Simple, yet cute! Hope you have a germ free Halloween. Germs are scary!! 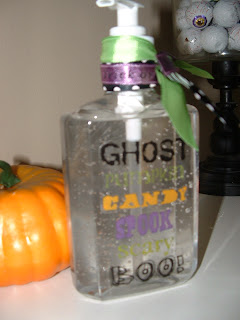 Missy
Alabama
I am the wife to my guy, William, and a stay-at-home mom to 3 great kids. I enjoy my family, crafting, baking, decorating, and entertaining. Basically, a little bit of this and a little bit of that. Why Simply Red? I am a red head and have had the nickname of "Red" for a long time. So.... it's simply me sharing a bit of my life with you.

Thanks to everyone who has given me a blog award!
I appreciate your kindness!